Australia’s traffic lights conform to international standards, however if you are coming to Australia from another country there may be differences in the phasing to what you are used to.

Traffic lights have the phasing red, green, yellow, red, and this applies whether they are at an intersection or a pedestrian crossing. There is no flashing yellow, no red plus yellow, and red always means stop (there’s no automatic free turn like there is in America). You must stop at a red light and wait behind the line until it turns green. Even if there is no traffic or the lights haven’t changed because the traffic light induction loop has failed, you must not go through a red light.

At some intersections you will see a red light with a green turning arrow which permits you to turn in the direction it is pointing. If the turning arrow is red, or there is no arrow at all, you are not allowed to turn.

For example the traffic light below shows that traffic going straight ahead or turning right must stop. The green filter light to the left means that traffic can turn left, but must give way to any pedestrians that are crossing. 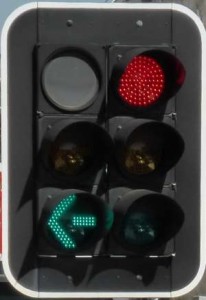 The only time you get a free turn left on a red light is if you see the following sign. You must stop at the line first, though. The image below also shows that the light has turned yellow. A yellow light means you must stop if it is possible to do so. 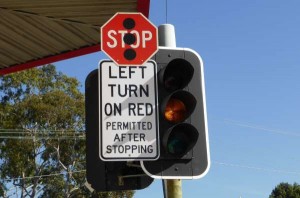 A green light means you can go straight ahead, turn left (if there are no crossing pedestrians), and turn right (if you give way to traffic coming towards you). 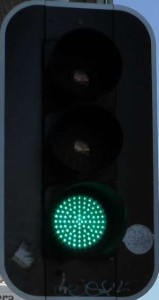 Before you drive through a green light you must make sure there is room for you on the other side of the intersection so that you don’t block traffic. If there is, wait behind the line until it’s clear to go.

When the light turns yellow you must stop if it’s possible to do so. Therefore the amount of time that a yellow light is displayed is carefully timed depending on the road’s gradient and speed limit in order to give traffic enough time to stop. Too short and some traffic will not be able to stop before the line and will end up driving through a red light; too long and people learn that they can rush through the light, creating a danger then for other shorter-phased yellow lights. The phasing is roughly 1 second per 13kph with most urban intersection yellow phases between four and six seconds.

An entire cycle from red to green to yellow to red is usually between 50 and 150 seconds, although specific cases might fall outside this window.

The all-red phase is when every traffic light at an intersection is red at the same time. This happens for two reasons:

How do traffic signals work?

Traffic signals give vehicles in each road entering the intersection time to proceed. They can work in isolation (common in areas where traffic lights are infrequent, traffic volumes are averagely low and the traffic flow is relatively balanced between all roads), or work in with other signals in the area (common in cities where groups of vehicles need to be shuffled between intersections, or one particular route should be given priority in order to move a large volume of traffic).

If they are isolated then they are controlled by vehicle loop detectors – loops of wire in the road that detect when a vehicle drives over them.

Coordinated signals are controlled by a central processor.

Red light cameras will trigger if you enter the intersection when the light is red, but not if it is yellow. 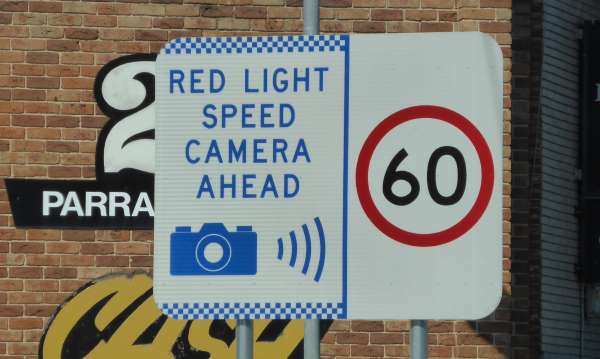 Red light running is a problem because it causes accidents. Some drivers deliberately run red lights, while others misjudge the yellow light thinking they have time to get through. Chronic red light running at an intersection implies that something needs to be changed at the intersection. It could be that drivers are frustrated with the phase times, the lights are not easy to see (e.g. they are too low and frequently obscured by heavy vehicles), or the phasing at a previous set of lights encourages drivers to try to race between them.

Changes in phasing to a set of lights can cause temporary problems as drivers that frequently use that intersection get used to the new times. Often a sign will be placed near the intersection warning drivers that the phase has been changed.

Temporary traffic lights control traffic at roadworks. Stop behind the sign. If you park too far forwards, the sensor that detects you are there and triggers the lights to change might not register your vehicle.

If you see a red flashing light outside a fire station, this means stop as there will be a fire engine exiting to attend a fire.

Emergency vehicles are allowed to pass through a red light if they are attending an incident and have lights and sirens operating.

Tagged with: intersections
Posted in Advice

What lanes can motorbikes use?

How to drive through a bushfire

If you're driving through wooded areas on a hot day, you need to know bushfire safety tips. Don't start the...