A week ago, on July 1 motorcycle lane filtering became legal with some strict conditions, and Transport for NSW has created a video that nicely explains the rules.

Lane filtering is when a motorcycle rider moves alongside or between vehicles that have either stopped or are moving slowly (less than 30kph). It’s common in other countries, particularly the UK, where it’s taught by motorcycle instructors.

What motorcyclists need to know about safe lane filtering 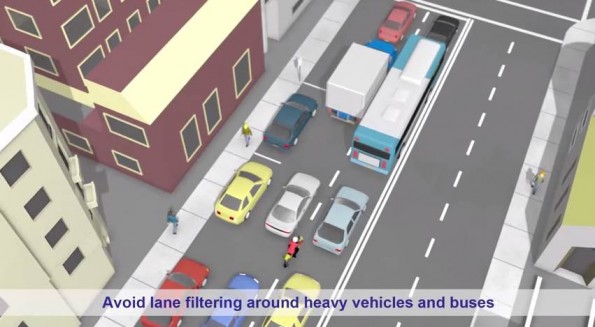 Safety information for other road users

Motorists should not deliberately move into the path of a motorcyclist who is lane filtering. If you see a motorcyclist approaching in your wing mirrors or rear-view mirror, you can help give them plenty of room by changing your lane position slightly.

Pedestrians should always cross at pedestrian crossings or traffic lights where they are available. Crossing between stationary traffic will put you at risk of being hit by a filtering motorcyclist.

Motorcyclists are being advised not to lane filter near parked vehicles or buses. Take particular care when crossing near vans and SUVs that may block your view.

Cyclists should always check twice for motorcycles. Cyclists are allowed to filter next to the kerb, while motorcyclists are not.

Minister for Roads and Freight Duncan Gay recently announced new rules that increase the number of 'safe vehicles' for P-platers. This new...