Driver Knowledge Tests
Home › Advice › Learning to drive? Here are 12 things you need to know that your car does (with images)

Learning to drive? Here are 12 things you need to know that your car does (with images)

The first time you get in a car you’ll see a potentially confusing array of switches, dials, stalks (wands), buttons, gauges and readouts. Modern cars have more and more of these features.

When you turn your headlights it will either be on a stalk (almost every modern car), or a dial on the dashboard (many Holdens and Audis). There will be at least two settings: sidelights and low-beam headlights. Some cars have a third setting called ‘Auto’ which will use a sensor on the windscreen to determine when to turn the headlights on.

Your full-beam headlights shine much brighter than low-beam (or ‘dipped’) headlights. They can be used to illuminate more of the open road. You usually access them either by pushing one of the stalks on the steering column forwards, or pulling a stalk back until it it clicks. They are turned off again, in both cases, by pulling the stalk back. If your stalks moves forward for full-beam (and most newer cars do), you can pull backwards briefly to flash your headlights.

Fog lights are usually operated by a separate switch or dial. Not all cars have them; it tends to be European cars. The usual configuration is two low headlights at the front and one red rear light. The red rear light is much brighter than the usual rear lights and is about the same intensity as brake lights. For this reason it shouldn’t be used when it’s not foggy because it can confuse (and dazzle) drivers.

If it’s foggy you wouldn’t use your full-beam headlights because the fog will reflect the light back at you making it more difficult to see. 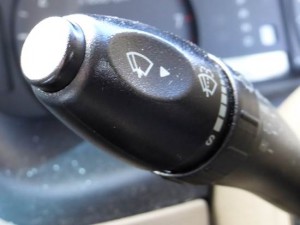 You’ll need to keep your windscreen clean and all newer cars have windscreen washers that spray water onto the windscreen synchronised with the wipers. The majority of cars have one or two sprayers on the bonnet, but some have the sprayer in the wipers themselves.

The usual way of activating the sprayer is to pull the windscreen stalk towards you.

Some cars have headlight washers that are activated when you activate the windscreen washers. 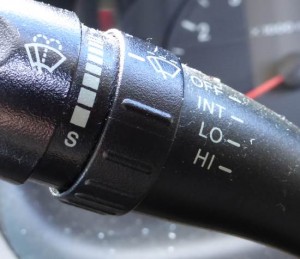 Depending on how new your car is, your wipers will have up to five settings: off, automatic, intermittent, slow (low), fast (high). The image shown has off, intermittent, low and high.

Cars with automatic wipers have a rain sensor usually on the windscreen behind the rear-view mirror. Intermittent wipers wipe at an interval which can be set by you. Usually there are 3-6 intervals ranging from once every several seconds down to almost continuous. Newer cars are often doing away with intermittent wipers in favour of just automatically detecting when the screen needs to be wiped.

The next setting is low. This is a low speed continuous wiping action that’s good for drizzle, and light-to-moderate rain. The highest setting is for the fastest wiper speed that will cope with all but the most torrential of downpours.

If you use your low speed wipers when intermittent will suffice, you will be wearing out your wiper blades early and that will cost you money unnecessarily.

Your car will either have a button to turn the air conditioning system onto recirculate, or a slider. The majority of new cars have a button and it’s only base model vehicles like the base model Toyota Hilux that still maintain a slider. A slider does have advantages in that you can set the air to half recirculate and half from the outside, but this isn’t really necessary nowadays.

Use outside air when you are on the open road and away from fumes. Be aware that breathing in fumes is not good for you, so using recirculate in the city can help minimise how many fumes come into the car.

Recirculating air without using the air conditioning will eventually fog up the windows as the moisture from your breath increases the humidity in the car and it condenses on the cooler windscreen. 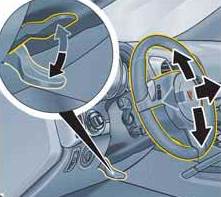 Many cars have a trip computer that will feature a temperature gauge. You should use this to determine whether or not the roads might be icy. Anything less than 3 degrees Celcius means there’s a risk of ice on the roads.

Also, any temperature above mid-teens (Celcius) and you should not be leaving a pet in the car as the car can heat up quickly and they could die from heat exhaustion.

Photochromic mirrors auto-dim when a sensor detects that a vehicle is following you at night. These can be turned on or off (see the switch at the bottom of the mirror). If your car doesn’t have photochromic mirrors it will probably have one of the old-style mirrors which has a lever underneath it to change the angle of refraction and thus dim the light. New technology is emerging that uses a camera to generate the rear view in the same mirror. For example, most new Kias come with an in-mirror reversing camera. Some mirrors also come with other functions such as this one with a built-in compass.

Your rear window will have wires in it through which a low power current is passed to heat up the glass. This is to demist the rear window. Note the difference in the icon shape on the button differentiates the rear window from the front windscreen.

Most newer cars have a trip A and trip B counter. You can use one of these to help you monitor your fuel economy – just set it to zero when you fill up and then note down how much you’ve spent. You can use the other to monitor longer journeys. For example, if you’re making a journey of a couple of hundred kilometres, set the trip counter to zero and then you’ll know (with a little bit of mental calculation) how far you’ve have left in your journey.