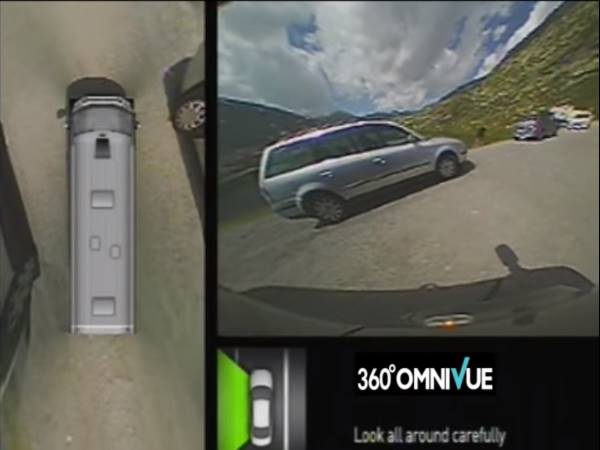 There are some technologies that are starting to become more common on vehicles which help with safety and convenience, and can be beneficial to the environment.

Regenerative braking is when kinetic energy is recovered during braking. Usually, braking results in heat which is wasted. Hybrid and electric vehicles, and vehicles that have a small battery for certain functions such as drive-by-wire systems, can make use of captured energy from braking. A portion of the kinetic energy from braking is captured by a generator and stored in a high-voltage battery. It helps preserve your friction brakes because the generator gives you braking power without needing as much pressure on the brake pads, which means your brakes don’t wear out as quickly.

Automatic parking uses sensors on the side of the car to detect when you pass a space that is suitable for the vehicle to fit into. The video below under ‘All around view’ shows an example in a BMW. While this just shows parallel parking, some manufacturers (e.g. Holden) also have a perpendicular parking function where it will reverse you into a parking space at right-angles to the kerb. The video below shows a version of the ‘all around view’, but see below for a more impressive video.

As you can see in the video below, cameras underneath the wing mirrors and at the front and back back simulate a bird’s-eye view of the car. This is particularly useful in tight manoeuvring situations, for example when parking in a tight spot. Also, if you are driving through narrow streets in a long vehicle you can see how close you are to other vehicles or roadside furniture such as signs.

Hill Start Assist helps prevent your vehicle rolling back when you start on a hill. If you stop on a slope the car detects that it’s on a hill and automatically activates Hill Start Assist. It retains some pressure on the brakes for about two seconds after you take your foot off the brake to cover for the time it takes you to press the accelerator. When it detects enough throttle input to move forward, it releases the brakes.

Hill Start Assist also works in reverse on some vehicles, but not all – it depends on the system installed.

If you’re in a high-sided vehicle, such as an SUV or a van, and have to take a quick evasive manoeuvre, it can cause the vehicle to roll over.  With Roll-over Mitigation the existing Electronic Stability Programme sensors constantly monitor the vehicle for extreme lateral tyre force.

When pulling a trailer it can start swaying on a corner, as a result of a cross wind or turbulence from an oncoming large vehicle, or when the trailer’s critical velocity is exceeded. Trailer Sway Mitigation detects the motion of the trailer and uses active ESP (Electronic Stability Programme) to brake wheels individually to help bring the trailer back under control. Without this, the driver tends to over-correct the steering inputs, making the trailer sway worse. Trailer Sway Mitigation is especially useful on utes with a large towing capacity, such as the Ford Ranger (which will tow up to 3500kg), which are light at the back when unladen; a swaying trailer can easily pull the ute around and into the path of oncoming traffic.

New vehicles in America commonly come with built-in internet. Systems such as BMW’s ConnectedDrive have a SIM card in every vehicle so that it can connect itself rather than via a phone. Expect a raft of apps to appear, as well as the standard options of the system making an automated emergency call in the event of an accident.

Sensors and a video camera in the front of the vehicle constantly monitor your speed in relation to the distance available to stop. If they detect an obstacle ahead, the vehicle will first warn you, then will apply the brakes to help either avoid a collision, or at least minimise it. The system can support the driver’s braking efforts by increasing the amount of braking if required.