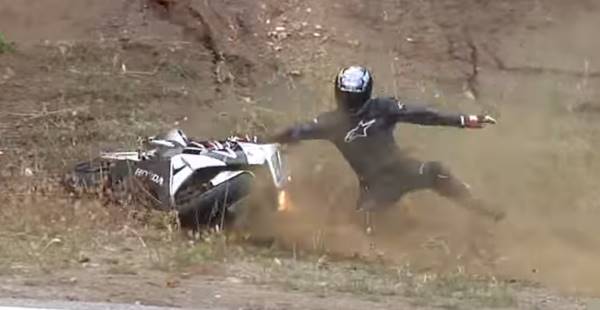 There are a number of ways you can come off your bike, including over the handlebars, off the back, or hitting something. There are two very common ways of crashing on a corner and they are the lowside and highside crash. They’re a result of two different things happening on the bike and we’ll explain how it can happen and show some on videos.

A lowside crash is where the bike will end up on the same side as the way you are cornering. It’s caused when either the front or rear wheel slides out, usually as a result of either too much braking into the corner, too much acceleration through or out of the corner, or simply too much speed through the corner for the available grip (this could be because the surface changes, e.g. there’s gravel or dust on the road, or a tarmac bleed). To avoid lowside crashes, brake and change down gears before you get to the corner.

As you can see in the video below, the front wheel loses grip and turns inwards as the rider tips the bike over too much. You can hear from the soundtrack that the rider is still on the throttle through the corner. Slightly less speed and less angle would have seen the rider stay on the bike. The bike lays down on its side and the rider and bike slide off the edge of the road. In this particular case it was fairly low speed and there wasn’t anything solid for the rider to hit when he slid off the road. There is some damage to the bike’s bodywork and handgrip. The rider is wearing full protective gear so escapes unscathed.

Rear wheel lowside crashes are almost always caused by too much acceleration. In this case you can hear rider applying the accelerator and the bike loses grip in the rear, spinning out and causing panel damage. Again, the rider is wearing full protective gear and it’s a fairly slow speed corner.

A lowside can also happen if the rider drags the peg on the road surface because this lifts the bike, reducing the grip. Whether it’s the front wheel or rear wheel that slides will depend on the centre of gravity of the bike and the location of the peg.

Injury risks with a lowside crash

Injuries tend to be less severe with a lowside crash. The rider usually slides behind the bike and if proper protective clothing is worn, gravel rash can be avoided (read our guide on protective clothing here). If the speeds are high then the rider can slide into something immovable such as a railing or tree, or if taking a left curve can slide across the right-hand lane into the path of oncoming traffic. Riders that choose not to wear full-face helmets are at risk of serious facial injuries in a lowside crash as the accident will drop the rider sideways onto the tarmac.

As the rider is falling, bruising can occur on the hip, elbow, knee and ankle on the side of the lowside. If the ankle is trapped under the bike it can cause more serious injuries such as a fracture or break.

A highside is caused when the rear wheel loses lateral grip then regains it violently. A highside can be caused if the wheel locks up if the engine seizes or the chain comes off. A highside crash is more dangerous because the rider is usually flung over the bike, often in the path of travel of the bike. If the rider hits something solid and stops, the bike can then hit the rider at speed causing serious injuries. The highside is more violent on the bike, too.

It is most common when the rider over-corrects a rear-wheel slide. The bike suddenly grips and sends the rider the other way.

In this video you can see the biker’s point of view. The rear wheel suddenly loses grip and slides out, but then regains grip flinging the rider headfirst off the bike. This video has an excellent slow motion component explaining what’s happening, from about 2 minutes in.

A loose chain can cause a wheel to lock which can initiate a skid that could cause a highside.

There are some technologies that are starting to become more common on vehicles which help with safety and convenience, and...