Tourists sometimes cause accidents and this is usually because of tiredness due to jet lag (you have to fly a long way to get here from Europe or America), unfamiliarity with driving on the left, distractions, or an accident with one of our abundant large native animals and birds. But some accidents are also caused by not knowing the road rules.

This guide gives you an overview of the important road rules you need to know, regardless of which territory you are driving in. Do your bit by learning the road rules – you can take our tourist road rules quiz here.

Australia has some fantastic roads through spectacular scenery. The problem is that the driver often wants to look at the scenery along with the passengers and this takes the driver’s eyes from the road.

Conversely Australia also has some of the most boring, mind-numbing roads that will send you to sleep. For example, if you want to drive from Perth to Adelaide you’ll experience hundreds of kilometres of fundamentally straight road with unchanging scenery and only the odd roadhouse to break up your journey. Be careful you don’t fall asleep.

We drive on the left 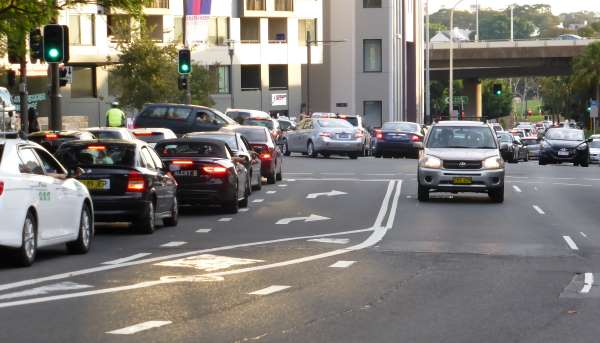 Just like New Zealand, Japan and the UK, we drive on the left hand side. If you’re used to going around roundabout (turning circles) anticlockwise, this means you’ll need to take extra care because we drive around them clockwise. In rush hour you will need to have your wits about you because it’s often difficult to change lanes.

Driving on the left can be especially confusing for drivers when exiting a one-lane bridge or a one-way street because it’s easy for you to slip back into your driving habits and exit on the right.

As well as domesticated animals such as cattle and sheep which often roam freely on large stations in rural and outback areas, we have some fairly large native animals and birds that are big enough to seriously damage a car and potentially kill occupants. The first is the kangaroo. Big male roos can be six feet tall and have a habit of jumping out in front of your car. Wallabies are smaller, but can still create a dent, as can wombats. Where you need to be really careful around wildlife, though, is in areas where there are cassowaries. Cassowaries are the third largest bird in the world and they are endangered in Australia. They are found on the east coast, most commonly in the tropical north and there are probably only around 1500 remaining.

The second largest bird, the emu, is also native to Australia and is found in most areas. Hitting a tall bird that weighs 50kg will take its legs from under it, meaning the heavy body will impact the windscreen.

For the cassowary and emu, drive very carefully between dusk and dawn, and for large marsupials like kangaroos, drive carefully at dusk and dawn where they blend into the grassland easily.

If you are driving in the outback, expect there to be long distances with infrequent stops. Take water and food if you are on roads that are unlikely to have much traffic, and let someone know of your travel intentions.

Carry your licence with you

You must carry your licence with you at all times. You can drive on a foreign licence indefinitely as long as you remain a temporary visitor; temporary or permanent residents must change their licence within 3 months.

The basic rules are:

The usual open road/expressway/motorway speed limits are 100 or 110kph – look for the signs. In the Northern Territory they are 130kph in places.

There is a very low tolerance for being over the speed limit in some areas, particularly in Victoria – expect to be ticketed for even 3-4kph over the limit.

The urban speed limit is 50kph or 60kph – look for the signs. On some arterial routes the limit might be 70 or 80kph.

There are temporary speed limits in force in some areas at certain times, e.g. 40kph around school zones, 40kph passing a school bus, and 10kph or 20kph in some areas with either shared pedestrian zones, or heavy pedestrian traffic.

Flash floods are common in the north during the rainy season. Make sure you know what the weather forecast is going to be as whole communities can be cut off for days or weeks with roads blocked or impassable.

You must wait at a red light until you get a green light unless the lights are displayed like below. 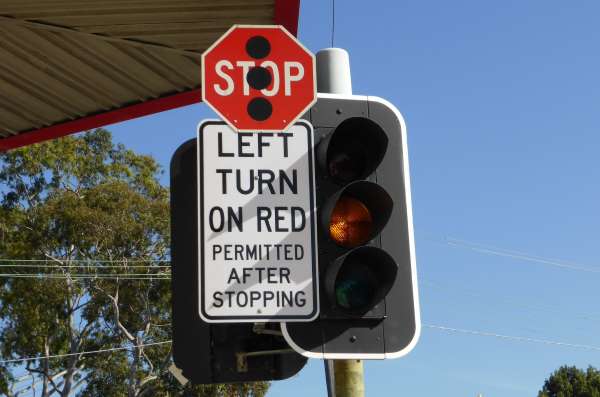 There is no other free turn on a red like there is in North America.

Red lights must also be obeyed at railway crossings.

Every passenger must wear a seat belt if one is provided. The driver is responsible for making passengers wear their seat belts. Both the driver and any passengers over 16 not wearing a seat belt will be fined if caught.

Children up to the age of 7 must be in an approved child restraint or booster seat.

Clearways and no parking 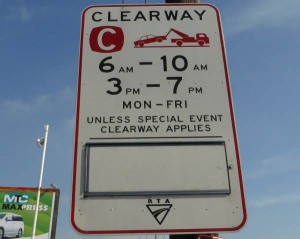 Unlike in New Zealand where a dashed yellow line means no parking or stopping at all, it just means a clearway in Australia, and you are not allowed to stop and park between the designated hours. A solid yellow line is a no stopping zone.

There are many railway crossings which don’t have lights and barrier arms, especially in Queensland where the cane railway services the sugar cane industry. Take care and look both ways before crossing.

In rural areas you will sometimes find bridges that are only wide enough for one vehicle. When driving off these bridges make sure you exit on the left-hand side of the road.

Now have a go at our tourist road rules quiz here.