Driver Knowledge Tests
Home › Advice › What is signage clutter and how do we reduce it?

We need signs on the road to help us know where to drive, where not to park, what street names are and where areas of interest are. But how many signs do we need? There have been experiments in Europe where road authorities have removed almost all signs and have seen accident rates fall. In this article we’ll look at what signage clutter is, whether we need signs, how road authorities go about reducing it and what benefits can be gained by all road users by keeping the number of signs to a minimum.

Signage clutter is when there are too many competing signals for a road user to comprehend. These signals include traffic signs, traffic lights, street signs, and road markings. They compete with advertising hoardings, vehicle signage, illegal or non-official signs and other distractions and can cause motorists to be overwhelmed with information if there are too many of them. 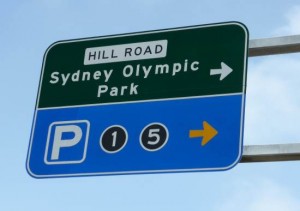 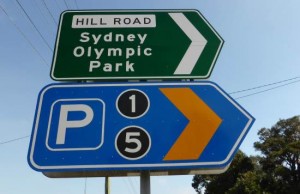 Combination signs such as this one are better than having two separate signs as there is one focal point for the driver and the context is related, i.e. it’s parking at Sydney Olympic park. Using different colours and text styles means that drivers can quickly become accustomed to viewing either all the information, or just the information they need. For example, the road name has a white block background with green writing, whereas the destination is white writing on a green background. Parking instruction is always in blue.

However, here we see two signs that say exactly the same thing but are rendered differently. Does this have the potential to confuse? Would it be better to have the signs in the same format so that drivers don’t need to interpret the sign’s size and shape as being a variable?

A sign might be unnecessary if it states the obvious, or it duplicates information that is already provided. For example, let’s take the Prospect Highway exit off the M4 in Sydney. As you drive down the off-ramp you see this: two yellow roundabout advisory signs, but also a road sign showing that there’s a roundabout. 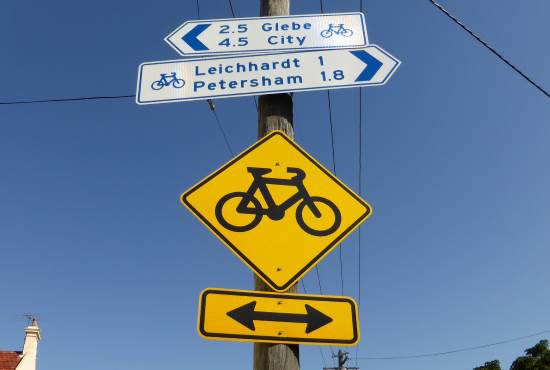 Similar duplication can often be seen around cycle lanes where you might see cycles painted on the road, sometimes with a dedicated green cycle lane, plus signage in black on yellow, plus street directions with cycle signs. The examples above are in Annandale. The painted cycles are less than 50m from the signage. 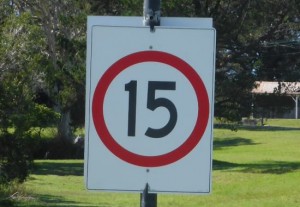 Numerous types of unlawful signs are erected on roadways every year. These can be simple hand-painted signs advertising a car for sale or a garage sale, or they can be semi-professionally produced signs that neighbourhoods put up to advise drivers that children could be playing in the street. Authorities will remove signs that they perceive as dangerous, or contravene laws.

The 15kph sign is a non-official sign in a quiet residential street in Sydney, next to a park. It looks like a proper speed limit sign, but the lettering and thickness of the red circle are different and it’s on plastic, not metal.

These signs tend to be more prevalent in smaller towns. They are signs that advise the local community which way to the church or village hall, or a public amenity only really used by people who live in that community. They are only useful the first time someone uses them as when you live in that community you’ll just get to know where it is. Often these signs are in a state of disrepair because they may be 20-30 years old.

Tourist destination signs are useful when they are either close to the tourist destination, or situated at major intersections where a tourist should exit to get to a major attraction. They are becoming less relevant, though, as tourists use GPS sat nav systems.

Road markings need to be maintained and this does necessitate closing the lane which disrupts traffic. Paint is also slippery for motorcyclists when it’s raining. 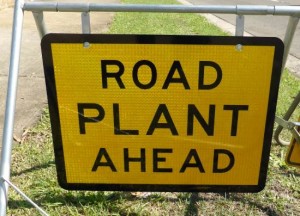 Road workers often forget to remove signs when they have finished. I found this sign with another just right next to it just off Parramatta Rd with no roadworks in sight. When this happens drivers become less likely to comply with this type of signage in a genuine situation, and that can lead to danger for road workers who then are exposed to higher traffic speeds and the risk of stones being flung up and hitting them.

Additionally, if they are lit, then there’s electricity, replacement bulbs and other maintenance on the lighting.

Every sign that a driver has to look at takes their eyes off the road, which increases danger. Over-signing can lead to ‘sign blindness’ where there are so many signs that drivers actually stop noticing them. Bear in mind that signage is already competing with advertising and other distractive methods of capturing your attention, therefore signs should be infrequent enough to be considered to be important every time.

Signs are mounted on either poles or gantries and these are objects that vehicles can hit. They can also partially obscure pedestrians and cyclists. When signs or road markings are being maintained, maintenance vehicles may have to block lanes which leads to traffic disruption and additional danger.

There is an environmental cost to producing signs: they are a mixture of metal, plastic and/or wood, all of which has to be mined or milled. Transporting and installing a sign takes fuel, too.

In terms of the visual environment, less clutter means an improved sense of spaciousness and naturalness in the environment.

What is the future of signage?

Common sense would say that as more and more people use smartphones with navigation apps, or have cars with either built-in or third-party navigation systems, we should need less signage, particularly signage which is purely directional towards a destination.

We also should consider the impact of vehicle technology that will mean cars will interpret the road and prevent us from getting into accidents. This type of autonomous vehicle technology is being pioneered by Google but is already available in a limited capacity on some vehicles. When vehicles know which way the road goes and can prevent accidents from happening we will need even less signage.

Do you think you know your Australian road signs? Try out our free signs quiz by clicking here.