Driver Knowledge Tests
Home › Car › Driverless cars: will the future mean you don’t have to have a driving licence?

Driverless cars: will the future mean you don’t have to have a driving licence?

To drive a car, you need a licence. It’s how it’s been for many decades, but it might not be like that forever because the car might be able to drive you. Driverless cars, also called self-driving cars or autonomous vehicles have been under development for years now, and in the last five years they have made so much progress that they are now faster than a race driver, safer than the safest motorist and can accurately navigate busy city streets in rush hour right through to winding mountain passes.

Scenario one is likely to be first because it is the most acceptable. Technically, planes could fly themselves from destination to destination but pilots are there in case things go wrong, and to make passengers feel comfortable. The public isn’t ready to accept a fleet of driverless cars on the roads yet.

What does this mean in Australia?

In the cities, driverless cars will be able to function easily. Once you get off the beaten track, though, they will struggle like any other driver would. A driver can, at the moment, make a judgement about whether a vehicle is likely to be able to traverse a particular piece of road; automated cars are designed for smooth surfaces right now. This isn’t to say they won’t have off-road smarts eventually as the military does have vehicles that will cope with difficult terrain autonomously, but those vehicles are designed specifically for that.

What’s already out there?

What you can buy 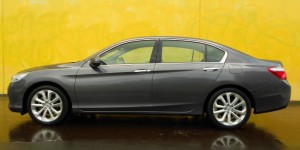 Manufacturers like Honda already have lane departure warning systems that gently steer you back between the white lines. Honda’s system, available on the Accord pictured on the left, is called Advanced Driver Assist System (ADAS) and consists of collision mitigation braking (it’ll brake for you if it detects you’re about to hit something), Adaptive Cruise Control (a cruise control that adjusts your speed to the car in front by using a radar to detect the distance) and Lane Keep Assist System (cameras monitor the white lines and if you don’t indicate the car will gently steer you back between the lines). LKAS works well on roads with consistent lines and smooth, gentle bends – I drove it for 30km on the motorway and only had to touch the steering wheel four times to make minor corrections.

Google’s self-driving Toyota Prius is the most well-known of all the autonomous vehicles. It is capable of navigating coned courses at speed, as well as driving through busy San Diego. Cadillac, Mercedes-Benz and others have demonstrated systems that are functional, but not commercialised yet.

Here’s a quick overview of GM’s new EN-V which talks to other cars like it so they can plan routes around each other and link up to travel in convoy.

A likely scenario: why would you use a self-driving car?

You want to drive to work, but it’s rush hour and you can’t face it. Plus, you really want to read the news or catch up on emails. Set your car to automated mode, program the destination and it will calculate the best route based on downloaded knowledge of current traffic conditions. This includes accidents, road conditions, known roadworks, and historical data from previous journeys.

You arrive at work refreshed and prepared for the day. Now you can send your car back to collect the kids and drop them off at school while your partner uses your other car to drive to a different destination.

What are the advantages of self-driving cars?

What are the problems that self-driving cars will bring?

We started this article by asking if you would need a driving licence when self-driving cars become popular. Initially, cars are likely to be dual purpose and therefore having a driving licence will be either essential or at least strongly advised.

Eventually, though, you won’t need a driving licence because getting in a driverless car will be like getting in a taxi now, except without a driver. But that’s perhaps two or three decades away, and if you live rurally it might never be completely reliable. You’re quite safe to get your driver’s licence now – you’ll be needing it for a while yet.

Readers – would you own a driverless car? Let us know your thoughts.