The risks of hitting animals on Australia’s roads

Depending on where you live you’ll have to deal with ‘roos, wallabies, cattle, sheep, emus, camels or cassowaries, but in autumn, you’re much more likely to see deer on the roads because it’s their mating seasons, and that creates an additional collision risk that is particularly dangerous for motorcyclists.

Animal crashes account for around 5-6% of accidents (and it’s estimated that this is under-reported). Of these accidents that resulted in serious injury for the driver/rider, motorcyclists represent over half of them. Kangaroos, wombats, wallabies and emus are the most prevalent road kill.

Deer have been bred in captivity for over 150 years. Red, Fallow and Axis deer have been found in the wild in Australia since 1861. Red, Fallow and Sambar are the deer that are most common. The harsh habitat in many regions prevents them from becoming too much of a pest so you don’t tend to see the larger herds that you might see in the UK or Europe except in places like Tasmania where there’s a lot of undulating grassland. In NSW you’ll find quite a few Fallow Deer around Glen Innes and further south, in ACT around Lake George, plus on the border of Queensland and NSW in the Southern Highlands. Populations of Red Deer are less dense. 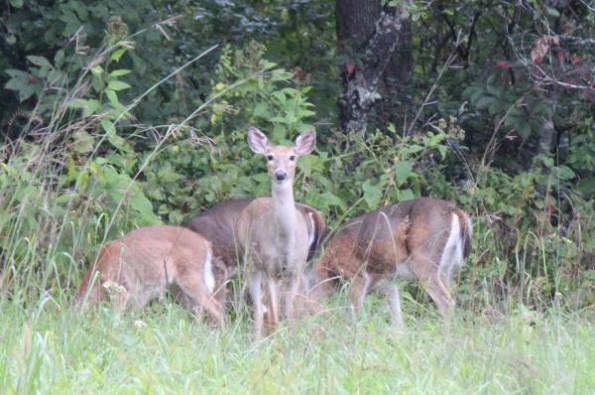 Much of the advice which applies to minimising your risk hitting deer on the road also applies to other large animals. Deer form herds for safety against predators and therefore if you see on one the road ahead, it’s likely there are at least a few more very close by, probably hiding in the undergrowth next to the road. Startled deer can run across a road en masse if frightened by something.

Drivers of quiet vehicles are more at risk. Your almost-silent hybrid gives deer less warning that something is approaching. If you are driving at night, the deer just see a point of light getting brighter and don’t necessarily associate this with danger (deer have zero road sense).

Deer are most active between dusk and midnight, and just before dawn. They like grassland areas with some tree cover, so the margins of pasture and forests are commonly used areas.

Deer are well-camouflaged against much of our vegetation. It’s important that you scan the roadside ahead to give yourself as much warning as possible.

Avoiding an accident with a large animal on the road

Kangaroos and wallabies are notorious for sitting in the grass on the side of the road then jumping out in front of your vehicle.

In general, the smaller the animal, the less you should consider swerving to avoid it. Unfortunately this isn’t good for the animal, but it’s better that you don’t create a secondary accident by losing control and ending up hitting a tree or (worse) crossing the centre line and hitting another vehicle coming towards you. 42% of fatal accidents in NSW between 2001-2005 where animals were implicated in the crash were caused by people swerving to avoid the animal.

While small deer, wallabies and roos will cause damage to your car, the main danger is from larger deer (e.g. stags) and cattle. A large Red Deer stag can weigh 160kg and have horns half a metre long. When you hit one, the nose of your car will sweep the legs out from under the deer, meaning that the body is now a stationary mass of more than 100kg that will hit your bonnet and/or windscreen. The worst case scenario is that a stag’s head (and body) pierces your windscreen but without killing the stag. Not only will you have a huge mass of mammal that could injure you, there will be a frightened stag with lethal horns trying to escape.

Therefore the best option is to take things a little slower – this will give you more time to react and will shorten your stopping distances. If you have time, use your horn to try to frighten the animal out of the way. If you do have to hit it, though, make sure to take your hand off the horn otherwise the air bag deploying will break your arm as it throws your arm into your face, most likely either breaking your nose, knocking teeth out or fracturing your jaw.

Brake in a straight line if possible as this will give you the maximum braking force. Once you start turning and braking you lengthen the stopping distance because the tyres have to cope with additional forces through trying to change direction.

You will have to make a decision at the last minute whether or not to swerve. There’s a chance you will swerve the same way as the animal runs. Motorcyclists, who should avoid hitting an animal if possible, will have more room to manoeuvre around one because they are smaller.

Slowing down for an animal you have seen

If you see an animal on the road up ahead, it’s probably not the only one around. If it’s night time, you should be driving with your lights on full beam unless you are following or approaching other traffic. This will give you more time to see. Once you spot an animal such as a deer, immediately switch your lights to low beam and slow down. High beam lights simply blind animals and means that they cannot see an escape route and are more likely to freeze.

If the animal does not move, use your horn. If you need to stop, put your hazard warning lights on and turn your lights onto side beam/daytime running lights so that the animal can see where to escape to. This applies with smaller animals, too, not just large animals.

If you injure an animal

The carcass of a large animal lying in the road (road kill) is a danger to motorcyclists. At night, it’s more difficult to pick out those kind of objects on the road. It is your responsibility to move the dead animal off the road if possible, and if not, to notify police.

If the animal is injured call the police or a local vet to find out what to do. Injured animals can be dangerous.

A large animal will more than likely cause some damage to your vehicle. If your headlights have been damaged it might mean that you cannot continue your journey and will need to get a tow truck or find some other way of reaching your destination.

You can fit bull bars to your vehicle if you live in an area where you are frequently exposed to large animals. Check out our article here.