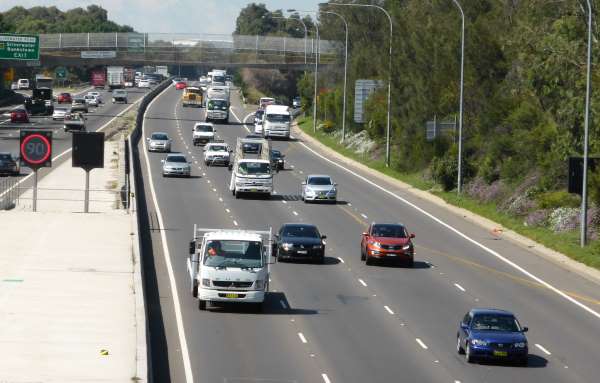 In Australia you will encounter speed limits of 100kph or 110kph on motorways. Motorways are designed to allow a large volume of traffic to move at speed. In general they are safer than two-way roads because there’s less likelihood of a head-on collision. However, they have their own set of complications and challenges that mean you need to be alert.

Whether it’s a four-lane motorway or a two-lane freeway your default lane for driving is the left-hand lane unless you are overtaking.

What do you need to consider when driving on a motorway?

There’s a huge emphasis by roading authorities and police to keep speeds down. Counter to this is a groundswell of support for raising the speed to 130kph on some roads, like in the Northern Territory.

The majority of people on the motorway will travel within a few kilometres per hour of the limit, either under or over it. Maintaining the flow of traffic is actually quite dependent on everyone travelling at a similar speed.

Driving too fast for the conditions means you don’t have the reaction time necessary to avoid incidents. This could be a vehicle braking ahead, someone moving into your lane, or a piece of debris on the road that can damage your vehicle.

Drivers travelling too fast spook other drivers and cause them to brake unnecessarily. It can also mean that other drivers don’t anticipate where you are going to be. Drivers on motorways expect all vehicles to be doing a similar speed, but if your closing speed is, for example, 30kph more than everyone else’s someone may pull into your lane because they don’t expect you’ll be travelling that fast.

Vehicle technology is improving in that new cars often come with blind spot warning systems that warn of an approaching car when changing lanes, but if you are going too fast, these systems aren’t effective.

Conversely, drivers that drive too slowly on the motorway are also a danger. If you or your vehicle is not capable of travelling close to the speed limit it may be better for you to not travel on the motorways. If you are travelling at 30kph less than everyone else you will be causing many people to change lanes to overtake you. Each lane change has the potential to slow other traffic down, and increases the risk of an accident.

In general, many people who drive at an average motorway speed like to stick in the middle lane because then they don’t have to deal with slow drivers or drivers that don’t know how to merge properly, which is what we’ll deal with next.

We’ve already spoken about how differences in speeds can be dangerous. If you attempt to enter the motorway while doing 30 or more kilometres per hour less than the other traffic you will cause them to brake. This causes a chain of braking that travels backwards up the motorway.

This article describes how a wave of stopped or slowed cars travels backwards up the motorway. You’ll see in the animations that it increases the risk of nose-to-tail accidents.

Build your speed to match that of the traffic on the motorway then merge like a zip. Look for a gap that you can slot yourself into and adjust your speed so you arrive at the motorway at the right time. Don’t stop at the end of the on-ramp as this is extremely dangerous.

Some estimates say that up to 25% of motorway crashes are caused by people making late or erratic lane changes. You must always signal your intention to change lanes so that people have enough warning, and you should match your speed with the lane you are moving into. Don’t be afraid of the accelerator – it is OK to push it all the way to the floor to gain speed quickly. At motorway speeds, most cars won’t accelerate rapidly.

If you are changing lanes to the right the traffic will most likely be going faster than you. Stay a little back from the vehicle in front and as you spot the gap coming, build your speed so you can slot into the flow of traffic. Be sure to check over your shoulder before you move. This is especially important for motorcyclists.

If you are changing lanes to the left the traffic will most likely be going slower than you. As you move into that lane you will need to brake. If you are doing this because you are approaching an off-ramp you will need to be aware that traffic ahead of you might slow unexpectedly.

If you miss your exit on a motorway, you must continue to the next exit. You are not allowed to reverse, do a u-turn or cross the central reservation on a motorway (or freeway).

When you leave the motorway you could have a false sense of how fast you are going. Some motorway exits have tight turns at the end. Check your speed as you slow down so that you don’t arrive at a corner way to fast.

The hard shoulder should only be used in an emergency. If you have to use it to change a flat tyre, make sure that you get back up to speed again before you attempt to merge onto the motorway.

If you are tailgating another driver then you will most likely be applying your brakes frequently because there’s very little buffer between you and the driver in front, therefore minor changes in their speed will be very noticeable to you.

Your brake lights are a trigger to others behind you to take their foot of the accelerator and either brake or get ready to brake and, in-turn, those behind them will brake until it gets far enough back that there’s a sufficient gap it doesn’t affect anyone. You can see how this can really compound in rush hour – it’s how traffic jams start.

If you’re using your brakes a lot, you’re wearing your brakes out quickly and that’ll hit you in the pocket when you need new brake pads or rotors. Hanging back a bit and using the two-second rule means you can be smoother with your braking, and it reduces your chance of having (or causing) a nose-to-tail accident.

According to this American news piece, tailgating is responsible for 25% of all accidents. In the UK, police are prosecuting drivers already. Police in Australia have the discretion to do this, too.

Before driving on a freeway or motorway you should make sure your vehicle has enough fuel, oil and water, and the correct tyre pressures. Sustained high-speed driving puts more stress on your engine and can also cause your tyres to overheat. Stopping on a freeway is more dangerous, even though there is an emergency lane. There is unlikely to be any where you can address these problems and you will create an unnecessary hazard if you have a preventable issue with your vehicle. It is important to have the correct tyre pressure because freeway speeds are high and incorrect tyre pressure can affect handling and increase the risk of a tyre blowout.