Why advice on skidding could be outdated and dangerous 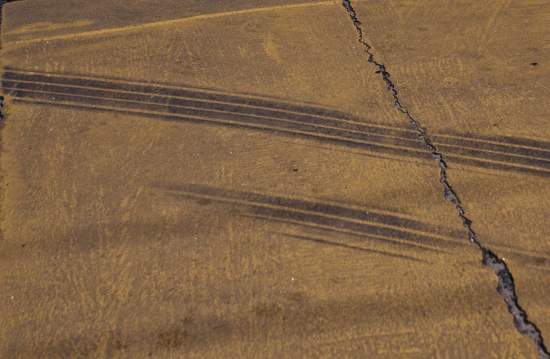 All these actions cause the friction between the tyre and the road to be overcome, the wheel’s surface slides on the road surface, the top layer melts and is deposited on the road.

When wheels lock up it’s as a result of applying the brakes too hard and the resulting skid tends to be in a straight line. They are often at the approach to pedestrian crossings, for example. ABS (anti-lock braking systems) have now become ubiquitous across cars and common on motorbikes and trucks. and it’s impossible to lock the wheels in any new vehicle. As time goes on, almost all vehicles on the road will have ABS so these long, straight skids will be very uncommon.

Wheelspin is a result of too much turning force being applied to the wheels when accelerating. It would be frequently seen at intersections where it might have been difficult to get out due to heavy traffic, and therefore heavy acceleration was required. Modern cars come with traction control that limits this. If the vehicle detects wheelspin it individually either brakes the spinning wheels or reduces engine power until the spinning stops and grip is regained.

Lateral sliding is due to cornering too sharply. Part of the reduction is due to improved tyre technology offering better grip, improved suspension technology offering more balanced grip across all wheels, and wider tyres offering more contact with the road and thus more grip. Understeer (where the front wheels ‘sledge’ forwards even though turned), or oversteer (where the rear wheels slide towards the outside of the direction of turning) are fast becoming a thing of the past with electronic stability control and other electronic aids. It is still possible to drive too fast for a corner – ESC doesn’t improve the overall grip of the tyres on the road – but if the car does start sliding, ABS is used selectively on each wheel to try to bring the vehicle back under control. Vehicles with ESC are, therefore incredibly difficult to put into any kind of skid.

Modern cars also come with electronic brake force distribution which distributes the braking power most effectively across all wheels depending on the levels of grip available, and brake assist which detects if you are braking in an emergency and applies full braking power.

Advice for getting out of a skid

Originally cars would have had cross-ply tyres which started to skid at fairly low speeds in a very uniform and predictable way. Drivers had time to react to the skid. Nowadays, our tyres are much wider and have much more grip, and the speed at which we start to skid is much higher leading to less time to react. It’s now much easier to overcorrect a skid and end up in a ‘tank slapper’ where you correct the skid then end up spinning back in the opposite direction.

There is now a problem with the advice given for getting out of a skid when you have new anti-skid technology. Driving manuals will tell you to turn into the skid if it’s oversteer (e.g. if the rear of the car snaps left, then you should also steer left) and ease off the accelerator, or ease off the brake pedal if it’s a straight line skid. These are now completely irrelevant with ESC, ABS and other technologies. If you begin to skid in a vehicle with ESC and ABS regardless of whether it’s understeer or oversteer, keep the brake fully depressed and steer where you want to go, which might not necessarily be directly into the skid. The electronics will brake each wheel individually to bring you back on track and will have detected your skid before you did, so look at where you want the car to go, and not at what you want to avoid.

It is still possible to have oversteer and understeer in a car fitted only with ABS. ESC is the technology that will significantly improve your chances of surviving a ‘moment’ on the roads, and it’s available in almost all new cars under various names like VSC (vehicle stability control), Stabilitrak, and ESP (electronic stability program).