Driver Knowledge Tests
Home › Car › Sydney’s reputation being damaged by poor transport network – how can we change how we drive?

Sydney’s reputation being damaged by poor transport network – how can we change how we drive? 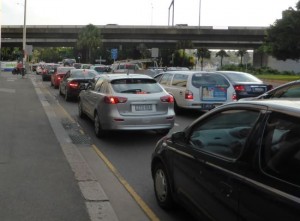 Sydney usually features somewhere in the top 10 in the world in surveys of liveability, natural environment and sustainability, but its rank is pulled down overall by our transport woes. As you’ll know, if you’ve tried to drive anywhere in Sydney, it can be completely random whether you get a clear run or snarled up traffic whether during the day or even on the weekend.

Public transport in Sydney is some of the most expensive in the world, and we have a general lack of taxis and transit coverage.

The government has announced an improvement program for train stations, but what can motorists do to help?

The obvious cause of congestion is too many vehicles for the road, but how we drive has a major impact on how congested the road are, so below are suggestions on how you can change your driving to help ease congestion.

Do you need to make that journey now, or can it wait until traffic is lighter? Traffic build-up is exponential: removing one car from rush hour makes a bigger positive difference than adding one car to traffic flowing freely. If you can change your work shifts to start a little earlier or later this can help spread the traffic loads. Or, can you telecommute once a day?

In general, Fridays are less busy than other week days, so if you are going to telecommute, try picking a day other than Friday.

Do you need to drop the kids off at school? Can you drop them part way there? Can they take public transport the whole way? Perhaps you could teach them how. Can they car pool with other parents, and you share a roster?

When you change lanes on a congested motorway you cause many vehicles behind you in the lane you’re moving to to brake, which slows all traffic down. So, when you see someone jumping backwards and forwards between lanes trying to eke out some 5-car advantage by the time they get off the motorway, bear in mind that if no one changed lanes unnecessarily, traffic would flow much more smoothly.

Not noticing the lights have changed to green, and/or dawdling away from the lights delays everyone behind you. You don’t need to accelerate full throttle, but bear in mind that traffic light schedules are designed to shuffle packets of traffic up a road – this is why it’s rare that you will get a run of green lights, and that it’s usually that you get a green light and the next one is red. However, getting away from the lights promptly often means you can catch the tail end of the green light ahead of you.

Practicality vs. guidelines: we are often advised to stop behind the vehicle in front so that we can see their rear wheels in case that vehicle breaks down and we have to drive around it. This was good advice for 50 years ago because cars broke down a lot. It also does provide a bit of a buffer if someone hits you from behind. However, in rush hour, all traffic is moving slowly, and it’s unlikely that the vehicle in front will break down.

If you leave a huge amount of space between you and the car in front, you reduce the amount of vehicles that can get through the lights behind you, thus delaying their journey and contributing to extending the rush hour. If the car in front edges forward, edge forward with it.

If you are on and off the brake all the time it makes drivers behind you nervous, and also causes them to brake unnecessarily, slowing traffic down.

Reality vs. guidelines: tailgating is the largest cause of accidents in rush hour. Those bumps that leave you on the side of the road cause huge delays for other motorists who have to drive around you. If you want to know why tailgating might be beneficial, check this article out.

Given that our temperatures mostly range between mild to scorching, it's highly likely that you will not have had much...