How to adjust your wing mirrors correctly

Your car’s wing mirrors are there to allow you to see behind your car so that you can manoeuvre in car parks, change lanes and pull out of parking spaces. They are not a complete replacement for turning your head and looking over your shoulder – they’ll always have a blind spot – but they help minimise the blind spot and keep you abreast of what’s going on behind your car. The problem is that many people just don’t have them set effectively and that increases the risk of pulling into the path of another road users.

We’re going to show you how you can easily set up your wing mirrors using three photos we took while were were in New Zealand of all places. Wing mirror setup is universal, so don’t think that we’ve done it a special Kiwi way; it’s just as relevant in the lucky country.

Before you start, you need to find out how to adjust the mirrors in the particular car you’re in. If it’s a modern car there will be some kind of electric adjustment (see below). If it’s an old(ish) car then you might see a lever poking into the passenger cabin where the wing mirror joins the bodywork. If it’s a really old car then you might have to wind down the window and move the mirror or the whole assembly with your hand.

Modern systems tend to look similar to this one which is off the Commodore in the driveway. 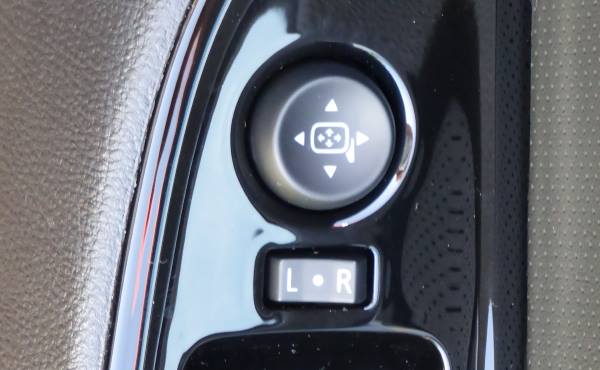 Or this one, which is off the Toyota. Both have a selector to choose between the left and right mirror, and a four-way button to adjust them up, down, left or right. The Toyota also has a button to fold the mirrors inwards – useful when parked in tight spaces to avoid damage by pedestrians passing between cars, and to reduce the risk of other vehicles hitting them.

The correct angle for the mirrors

You can see far too much of the car in this shot. You don’t need to see that much – the mirror can be angled further out so that you see more of the lane beside you. Angling it like this increases your blind spot. 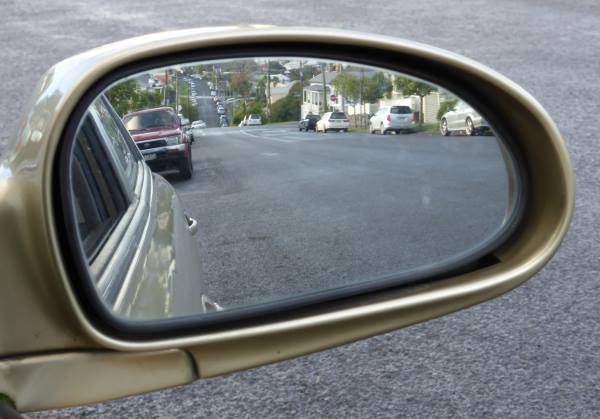 When the mirror is too far out you can’t see cyclists approaching from behind, so it’s dangerous. While you can see further into the lane beside you, you don’t have any reference point as to exactly where the vehicles are. 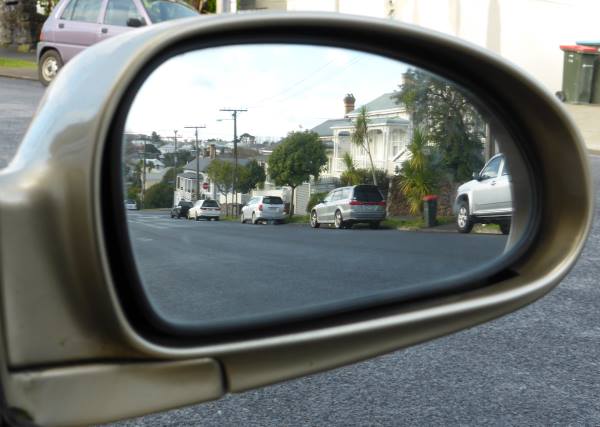 This mirror is adjusted perfectly. You can only just see the car that you are in. It means that you get the benefit of being able to see back up the line of cars parked behind you (good for spotting cyclists approaching), as well as a  good deal of the lane beside you. Having your mirror adjusted correctly doesn’t mean that you shouldn’t look in your blind spot, too, though. Every time you change lanes or pull out from a line of parked cars you must check your blind spot. 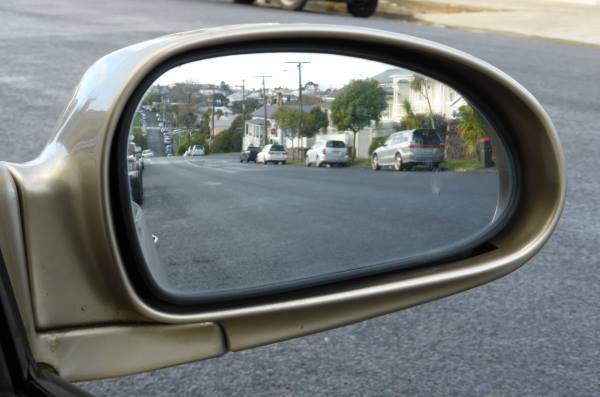 Once your mirror is properly adjusted remember that objects in it will always appear further away than they really are because of the convexity of the mirror. This is another reason why turning your head to take that final look is a good check.

0 comments on “How to adjust your wing mirrors correctly”

2 Pings/Trackbacks for "How to adjust your wing mirrors correctly"