How do you mark a grey stretch of tarmac so that drivers can see which way it goes both in daytime and nighttime?

Historically, roads didn’t have markings, but in the interests of safety, more and more roads now have painted lines and some form of raised pavement markers. You might know them as cat’s eyes or road studs – they’re what you see reflected back at you when you’re driving down the road at night.

The come in four colours:

Blue – these mark the position of fire hydrants or access to municipal water supply and are installed by local councils.

No other colours are permitted to be used on NSW roads, though if you travel overseas to the UK or NZ then you will see green studs, too.

The reasons for having road studs is that they provide visibility day and night, regardless of the weather, they provide audible and tactile feedback to the driver when they’re driven over and, using the different colours, they tell drivers which side of the road is left and right and indicate the direction the road is heading.

They do have some disadvantages, though: they are more expensive to install and have ongoing costs. If they are not maintained they can become loose and dangerous – in one case in the UK a loose cat’s eye was flicked up by a vehicle and hit and killed prominent DJ Kemistry.

They are not able to be used on unpaved roads, and we have plenty of those.

In urban areas the noise of vehicles travelling over road studs can be annoying for local residents.

The glazed surface is resistant to scratching and tyre marks and they are useful for showing vehicles lane markings during the day but not at night.  These are being phased out because they create a hazard if dislodged. They’re being replaced by paint. 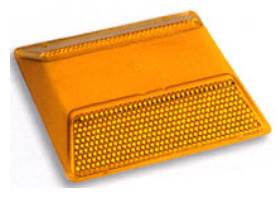 The marker contains glass spheres or corner cubes and is housed in an acrylic or plastic shell which is durable. The base is flat and they are stuck to the road using a hot melt adhesive.

They’re used to supplement road lines (pavement markings) and they are particularly helpful when it’s wet or foggy.

There are also illuminated raised pavement markers (IRPMs) which have their own light source, but they are expensive to install and maintain and they’re only really useful in places where street lighting isn’t effective, or to make drivers aware of a particularly difficult or dangerous area. 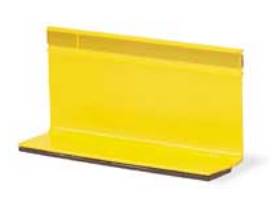 Temporary raised pavement markers are installed when resurfacing work is done and they provide delineation of the road until road lines or pavement markings can be painted on the new surface.

They are made of traffic-bearing, high-impact plastic so that they don’t snap off, and you will see them in white or yellow to mark either the lane line or the dividing line, respectively. They are designed to last several weeks.

They are usually located in the gaps (i.e. the broken lines) or with an offset if the lines are continuous, as you can see in the image below. 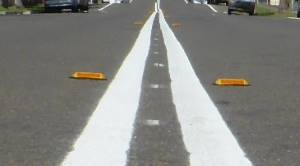 When are road studs installed?

Single carriageway two-way roads should have RRPMs to supplement the dividing line if the annual average daily traffic (AADT) (see definition in Section 1.6) is in excess either 3,000 vehicles on rural roads or 6,000 vehicles on urban roads.

On single carriageway, two-way roads, RRPMs should be provided where special conditions exist, such as:

Sometimes road studs are not used on rural roads if there are edge markers in place.

If noise will be an issue in urban areas they are sometimes omitted.

If a tunnel has sufficient lighting then they may not be required.