What happens if a truck tyre blows?

The tyre is unlikely to blow because of a nail or screw in the tread, it will simply go flat which is more difficult to detect while you are driving; eventually it will overheat and degrade.

A tyre could blow if the sidewall develops a weakness, the tyre is subject to a big impact due to a pothole or obstacle in the road, a part of the truck is rubbing up against it causing it to lose rubber, or something causes the tyre to overheat like improperly adjusted brakes or pressure that’s too low.

When a tyre blows it can damage bodywork, the mudguard, air and brake lines and the rim – basically, anything that’s near the tyre. There’s the initial explosion of air – often this is sideways, either towards the outside or the underneath of the truck or trailer, as the sidewall is the thinnest part of the tyre.  The tyre carcass often shreds and flails around with the turning of the wheel, banging into parts of the truck and trailer. Eventually, the tyre casing will start to degrade, giving up sizable chunks of rubber that can hit following vehicles. Retreads can become separated from the rim and that then poses a dangerous hazard to other motorists.

If a front tyre blows, the truck will either shake or pull towards the side of the blowout and the steering will become heavy. You might also feel the truck drop onto the road surface. There’s a high likelihood you’ll damage the wheel unless you can stop very quickly but gently (braking puts more stress through the front wheels).

If a trailer tyre or drive tyre blows, you may not feel it but you might hear it as it’ll sound a bit like a rifle shot. It’s not uncommon for a driver to be unaware that a rear tyre in a trailer has blown if the tyres are dual sets unless another motorist makes them aware. The other tyres on the trailer will support the weight and will allow a driver to drive a short distance to find a safe place to have it repaired. Sometimes a blown rear tyre will cause a vibration. 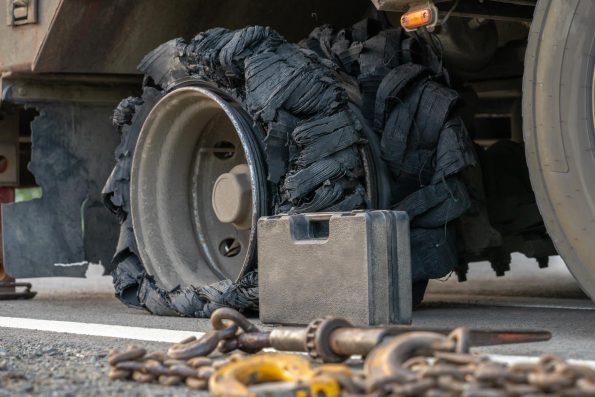 A tyre torn to pieces with visible damage to the truck

If a tyre fails while you are driving, hold the steering wheel firmly and take your foot off the accelerator. Don’t brake sharply unless you’re at risk of hitting something. Slow the truck down using the gears and braking gently, then pull off the road to stop (take care not to park on any soft ground where the truck could sink in, causing it to tip over).

Our local councils spend millions a year on repairing potholes. They appear in droves after torrential rain, but also gradually...