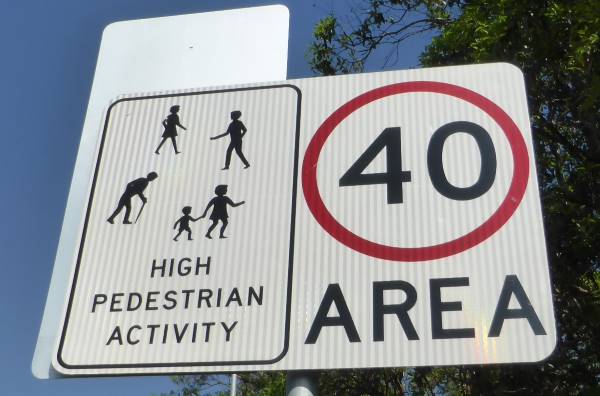 Speed limit signs are always a black number inside a red circle. In New South Wales the speed limits range from 10kph to 110kph in 10kph increments, but the majority of roads will either be 50kph in urban areas, 100kph in rural areas or 110kph on motorways and freeways.

Other territories have different speed limits (up to 130kph in Northern Territory) and different tolerances for exceeding the limit.

Within shared pedestrian zones the speed limit is as low as 10kph. Companies and individuals may place speed limit signs on their own property as low as 5kph, but these are not enforced by police or traffic authorities.

40kph is the limit in high pedestrian activity areas (as per the sign above), local traffic areas, school zones at prescribed times, when passing a school bus with orange lights flashing and school bus blackspot areas. As of September 1, 2018, it’s also the speed limit past stationary emergency vehicles with their emergency lights activated.

60kph is the limit on significant urban undivided arterial roads (with direct driveway accesses), divided roads with high volume where the lanes are narrow (less than 3.0 metres), and rural residential roads in villages with minimal development.

Roadworks have speed limits of 40, 60 or 80kph depending on the road and the type of works.

Seasonal zones can have different limits depending on the season (e.g. because of weather conditions or tourist numbers).

Advisory speeds at corners are not speed limits. They are to advise that a certain speed is a safe speed in dry weather.

Types of vehicles and licence classes and their maximum limits

Road trains: 90 kph (may have a speed limiter fitted)

Other heavy vehicles (i.e. a vehicle with a GVM of over 4.5 tonnes, including B doubles): 100 kph (may have a speed limiter fitted).

Some classes of vehicle will be restricted in certain areas while other vehicles don’t have that restriction. The image above shows that trucks and buses are restricted to 40kph in this zone. Cars and motorbikes are exempt from the restriction and the standard or posted speed limit for that area will apply (for example 50kph).

Tolerance for exceeding the speed limit

Exceeding the speed limit by any speed is technically against the law and you can be fined even if you are doing 1kph over the limit. However, some tolerance is allowed for common sense purposes: there is some variation in speedometer accuracy, a new set of tyres will read a lower speed than a worn set because of the greater circumference, drivers of different heights have a different view of the speedo needle, and it’s not beneficial to encourage drivers to be looking at their speedometer all the time as it means their eyes are diverted from the road.

If you are driving sensibly for the conditions with an appropriate gap to the vehicle in front then it’s unlikely you will stopped and ticketed for a coupe of kilometers per hour over the limit.

There is an undisclosed margin that you are allowed to exceed the limit by. This is sometimes said to be 10% yet at other times 3 or 5kph.

The best way to get an accurate speed reading is to use a GPS.

In reality, all new cars are set to under-read. I.e. if your speedo says you are doing 100kph you are more likely doing around 97kph. This is so that manufacturers avoid multiple law suits from people who thought they were driving within the limit but then get a ticket.

When you are riding normally in dry weather then you will be in the centre or centre-left of your lane...