Road maintenance is a balance between cost-effectiveness and durability. Our ever-increasing traffic volumes put more and more strain on the road and that leads to degradation of the asphalt or graded earth that then needs to be repaired. As Australia has around 850,000km of highways, there’s a lot of maintenance to be done, and different types of work are required.

Dirt roads in rural areas are graded reasonably regularly if they are well-used; other roads are basically just unimproved dirt or sand roads and might be unpassable after heavy rain. If a road hasn’t been graded in a while it will form corrugations, rutting and washouts. Rutting is where the vehicle’s wheels wear away the surface leaving the centre of the road higher. Lower vehicles can become grounded. Corrugations are closely-spaced ruts perpendicular to the direction of travel. They produce vibration when driving over them, often worse at lower speeds. Washouts are where creek beds have experienced heavy rain and it has washed away the surface, often making them deeper.

The majority of driving, though, is done on sealed roads – tarmac or asphalt – and these require regular maintenance. Here are the most common types of road degradation. Potholes start as a small crack in the road surface. The action of water and grit as vehicles pass over the crack begins to erode the edges. Temperature changes (particularly frosts) accelerate this process as water freezes in the crack, separating more particles. The crack widens and vehicle tyres pick up loose material carrying it away from the crack. This leaves the crack’s edges exposed and they get crushed further by the vehicles. More and more pieces become dislodged and either washed away or removed by vehicle tyres, and the crack widens into a pothole which can eventually become quite deep. The are particularly dangerous for motorbikes, but large potholes can even flip a car at high speed, if not doing serious damage to suspension components. Potholes don’t only occur on sealed roads, but are also a danger on unsealed roads where the surface can appear flat, but really the pothole is filled with low density bulldust (fine dust).

On sealed roads potholes are usually repaired by filling them. 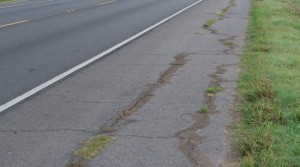 Edge cracks form along the edge of the sealed roadway. Often the edge of the road is damaged by heavy agricultural machinery or large trucks keeping left to make it easier for other vehicles to pass. As the edge of the road tends to be less compacted than the main driven part of the road, this can cause compression of the ground and subsidence. This sinking causes stress fractures in the asphalt and leads to long cracks running in the direction of the road.

Encroachment by vegetation makes it worse as seeds for weeds get into the base layer and begin growing through the surface layer, cracking it more. Poor drainage and frost accelerate the degradation.

If edge cracks are not fixed, crocodile cracks begin to develop. 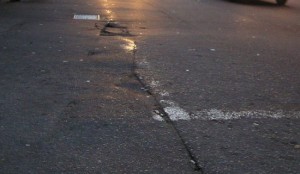 The other type of parallel cracking on the roads is longitudinal. This is almost always a result of a poorly constructed joint between two lanes of asphalt. A road will very rarely be laid the full width in one pass (unless its very narrow), therefore there’s always a joining crack between the two sides of the road which is sealed. Therefore these cracks mostly appear down the centre of the road. They’re made worse if there are large temperature variations due to the repeated expansion and contraction of the road surface. 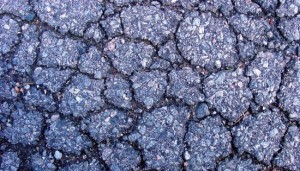 Crocodile cracks look like reptile scales and are also called alligator cracks and fatigue cracks. They’re caused by a weak surface or base, poor drainage and/or a large volume of heavy traffic. The cracking is usually so dense that it cannot be filled. The asphalt is taken up and replaced to its full depth.

Crocodile cracks start as thin cracks in the direction of the traffic. If not fixed, they develop transverse cracks joining them. If they are not fixed, potholes will develop. Preventing crocodile cracking is often as simple as increasing the depth of the asphalt to cope with the expected traffic load.

Block cracking is where large polygonal cracks (usually loosely a rectangle) form on the surface of the road. They are caused by incorrect application of the surface layer (mix is too dry), or they begin to happen when the surface gets old. The asphalt suffers from embrittlement due to oxidation. As the cracks are not usually deep they can be filled on the surface.

Other degradation of asphalt

Asphalt can suffer from bleeding in hot weather where the asphalt portion of the road mix rises to the surface and forms a slippery sheen. Grade depressions due to the base layer subsiding form long shallow depressions that can hold water.