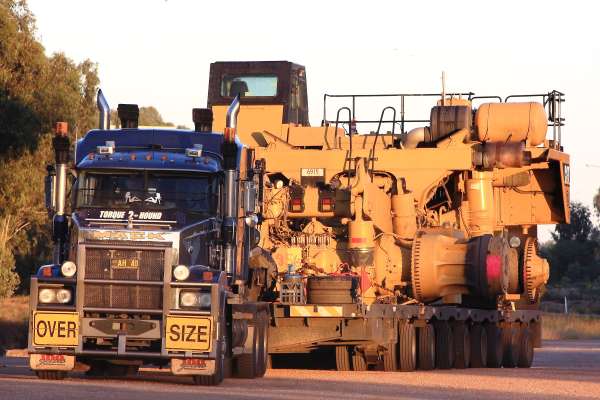 A heavy vehicle is one with a gross vehicle mass of more than 4.5 tonnes. These vehicles have restrictions for the safety of other road users. Sometimes they are allowed to do things that other road users aren’t, and sometimes they have their own lanes or speed limits (as indicated by the signs on the left).

The speed limit for all heavy vehicles with a GVM over 4.5 tonnes (except road trains) is 100kph. Road trains are limited to 90kph.

Loads can either be contained loads within a tipper truck, box trailer or tanker, or they be heavy loads that are secured by lashings, chains, strops and ropes. Contained loads are the best-restrained loads. Tarpaulins can be used on their own with ropes only if the load is very light.

Liquids and fine powders should be contained in a tanker. Tankers will often consist of smaller compartments with baffle plates to help stop liquid sloshing around. You should always empty one compartment completely before starting on another compartment as half-empty compartments are more at risk of the load moving and creating waves which can push the vehicle forwards under braking, or make it tip.

All other loads must be restrained. It’s against the law to drive a vehicle where the load isn’t secured.

When using tie downs to restrain a load the angle of the tie down should not be less than 30 degrees otherwise it doesn’t place enough downwards force on the load it is restraining.

To maintain the handling and balance of the truck, loads should be spread close to the centre line and kept as low as possible, with heavier items positioned near the bottom.

Loading a heavier item on one side can cause the chassis frame to twist, or overload the axle housings, wheel bearings and tyres. When braking this could cause the unloaded side to lock up, especially in the wet. On a rigid vehicle if a very heavy small load is placed against the headboard it could cause the chassis to bend. Very heavy small loads should be placed just ahead of the rear axle and blocked properly.

High loads are at greater risk of tipping over. High loads should be transported on a vehicle with a low platform to reduce the centre gravity, such as a drop frame or low loader. 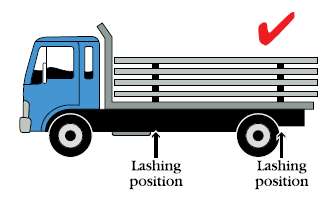 Dunnage is packing placed under or between parts of the load so that it can be unloaded with a forklift or lifting slings. It’s made of rectangular or square wood that is strong enough to support the load. The correct dunnage position for long rigid loads such as steel pipes is as above as this means they are less likely to move when restrained. The restraints are placed at the same points as the dunnage. 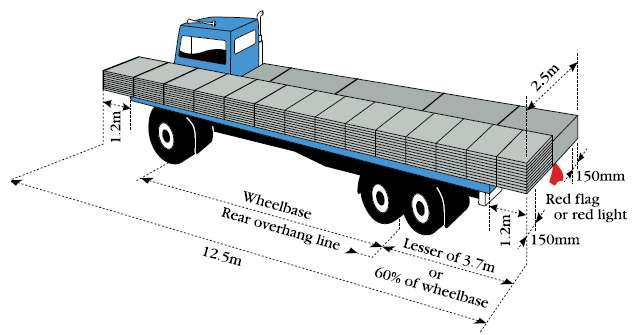 The maximum vehicle length for a rigid vehicle is 12.5m.

The maximum vehicle width is 2.5 metres for vehicles with a gross vehicle mass (GVM) of 4.5 tonnes or more which includes road trains, B-doubles, and heavy, medium and light rigid vehicles. The maximum allowable distance that a load may project on the side of a vehicle, provided the overall width does not exceed 2.5 metres, is 150mm.

The maximum length a load may project in front of a vehicle is 1.2m, and at the rear it must not exceed 3.7m or 60% of the wheelbase or project greater than 1.2m without a red flag or light.

A B-double must carry a long vehicle sign on the back.

The maximum height of a vehicle before an oversized permit is required is 4.3m. This includes all heavy vehicles such as trucks, single deck buses, etc. Drivers of large vehicles should take extra care when they see a sign with a height restriction on the approach to a bridge or tunnel and should only proceed if the vehicle is loaded under the maximum height of 4.3m.

Load shift can be caused by acceleration, braking, cornering, driving on slopes and driving over rough ground.

Blocking is where a load is restrained against the headboard or bulkhead and this is the most important part. In the diagram on the left, option 3 is the best way to place the load if the axle weights aren’t exceeded, with the bulkiest items up against the bulkhead so that they don’t move under braking, which is called load shift. Option 1 also is blocked, but has more weight over the rear which can make steering less effective, and option 2 isn’t blocked and the load could possibly slide forward under braking.

The majority of the load’s sustained force will be under braking, and any load restraint system needs to be able to restrain at least 80% of the load’s weight in a forward direction,  20% in a vertical direction and 50% in a sideways or rearwards direction.

When small pipes or logs are carried, gates and fences can be used to constrain sideways movement. 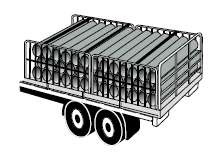 All pipes need to be clamped to prevent sideways movement, and the pipes are blocked against the headboard with lashings across the top. 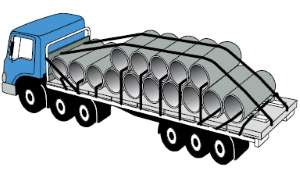 Divided loads are loads divided into two or more stacks to be able to crown them effectively. The lashings will be attached down the middle of the deck. 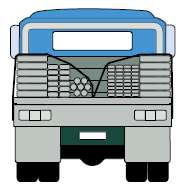 Always place loads with dangerous projections in a position to minimum risk to the driver. In the example below, the load is blocked against the headboard. If the load was the other way around there is a projection that could break through the headboard if the truck crashes or brakes heavily. 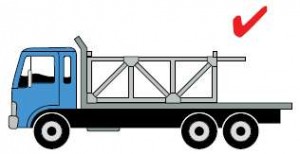 Loads with sharp edges can wear through lashings and gouged chains. Use projection for the lashings if a load has a hard edge and secure each line separately so that if one lashing fails, the others will hold. 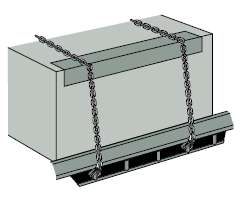 ISO containers are standard sized shipping containers that can be easily loaded onto a truck with a crane. They are secured by twist locks. Vehicles without twist locks should not be used to carry these loads if the container contains cargo. If the container is empty it can be chained to a vehicle for transport. 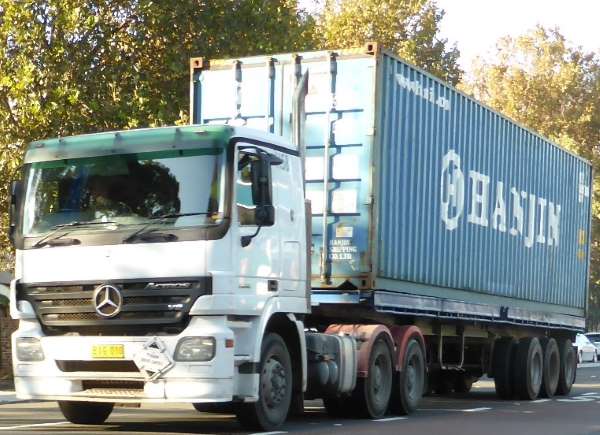 Different types of axles can accommodate different load levels. Axles can have two or more tyres and they can be standard tyres or oversized tyres.

In the case of an axle with four standard tyres, the maximum weight over the axle is 9 tonnes.

In this tandem axle with eight standard tyres the maximum statutory load is 16.5 tonnes.

A vehicle monitor is a device like a tachograph or ‘electronic black box’. It records the vehicle’s operation whether the engine is on or off, including the speeds, distances, lengths of time the vehicle is moving or stationary, the times used, the dates used, the driver’s identification, the driver base (i.e. where the driver usually works from), and the locations visited.

Vehicle monitors have some legal benefits in that law enforcement can prosecute drivers that flout laws; they also have benefits to the companies that use them because they can ensure their drivers are taking adequate rest breaks, not breaking speed limits (and therefore saving fuel), and are planning their trips effectively.

It is a legal requirement for the following vehicles to have monitors in New South Wales:

Vehicle monitoring device records for B-doubles must be retained for at least 6 months.

You must not borrow someone else’s work diary to record your work and rest hours.

Rest time is counted in blocks of 15 minutes.

You should sign, date and add up the work and rest hours in my heavy vehicle work diary every day on the daily sheet in the work diary. 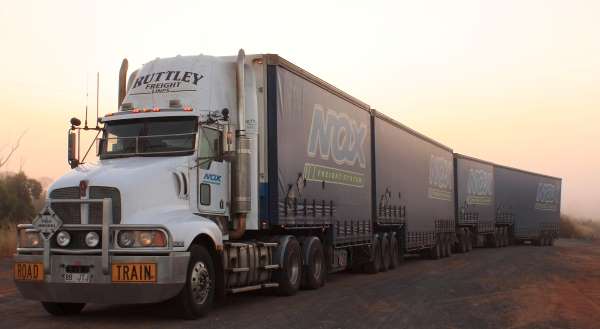 Speed limiters for road trains are required to be set for a maximum of 90kph. Other heavy vehicles, like B doubles, may have their speed limiter set for 100kph.

Usually ROAD and TRAIN are displayed either side of the number plate that is in the centre, but this position is not mandated and it can be displayed anywhere on the front of the hauling unit that is visible. Only vehicles classified as a road train are allowed to display signage indicating they are a road train, so no road train signs must be displayed on a vehicle that’s not a road train.

All units in the road train must be registered.

Your prime mover and semi-trailer should be in a straight line when coupling.

A B-double is an articulated vehicle with a second semi-trailer attached to the rear of the first semi-trailer by means of a turntable. Air brakes have either two or three lines connecting your cab to your trailer.

You will need to drain your air tanks every day to avoid moisture buildup which could freeze and cause blockages in cold temperatures. Most modern vehicles have automatic draining systems.

When you start your vehicle the best way to build up pressure in the tanks is under idle.

If you see the following sign then it’s likely that you are approaching a steep decline and you should change gear early to let engine braking take over rather than risk brake fade.

Many accidents with long and large vehicles occur when drivers are reversing and can’t see where they are going. Use a helper/guide/spotter behind your truck and/or trailer to help guide you while you reverse. Agreed hand signals help you to effectively carry out the helper’s instructions. 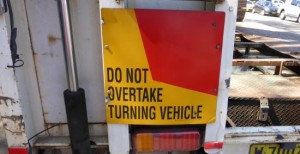 If you have signs saying ‘DO NOT OVERTAKE TURNING VEHICLE’ on the back of your truck (and it is over 7.5m long) then you are allowed to make a left turn from a lane next to the left-hand lane. You will still need to check your nearside mirror and your blind spots in case another road user hasn’t seen your turn signal and moves up on your left.

Any vehicle that has a GVM over 12 tonnes must display these retroreflective marking plates.